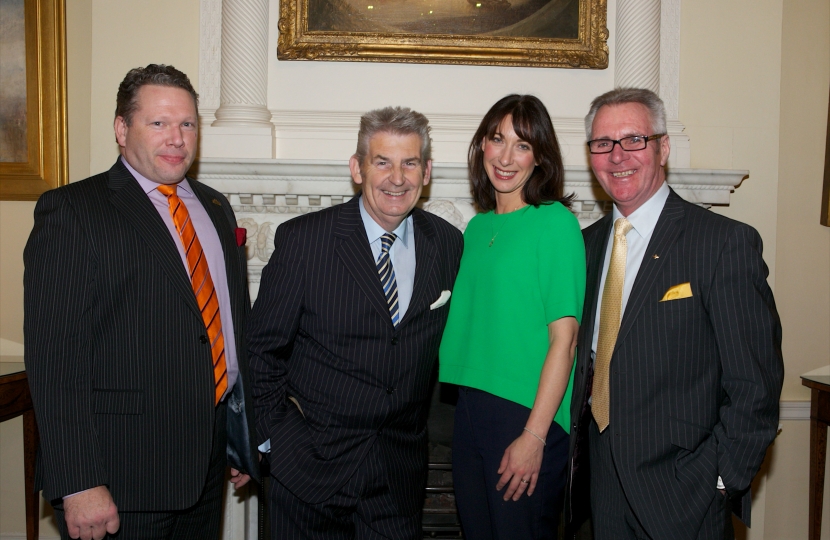 Conservative Members of Parliament and Parliamentary Candidates nominated two guests from their constituencies who they considered to be 'Charity Champions' to attend a Reception in their honour at 10 Downing Street.

Cooke & Connell Fundraisers carry out invaluable work in the City of Lincoln, ably assisting with tasks both large and small. Joe and Frank are both, along with their support team, held in great esteem by the people of the City and County. They have instigated the Lincoln Tank Memorial, soon to reach its conclusion, as well as assisting with homeless charities, and they assist individuals and families in very poignant and personal circumstances with direct and compassionate aid and assistance when it is most needed.

Samantha Cameron said: “It was a privilege to meet Joe Cooke MBE and Frank Connell of Cooke & Connell Fundraisers at 10 Downing Street. Their amazing work is changing the lives of individuals and families across Lincoln and Lincolnshire and it was an honour to celebrate their work at the Reception for Charity Champions.”

Karl McCartney MP said: “Joe Cooke MBE and Frank Connell have worked together across a whole range of fundraising projects in Lincoln for the best part of three decades . To fundraise for any cause is commendable, to do so for over such a long period of time, involving and regularly cajoling many of Lincoln's inhabitants from right across the City to support their good causes year after year is truly remarkable.

“Joe and Frank’s selfless acts of giving, in both time, effort and personal monetary value, is an inspiration to all and I was delighted that they both agreed to join me at Samantha Cameron’s Downing Street Reception.”

Patricia Carter, the Secretary of Cooke & Connell Fundraisers at pcarter2004@msn.com