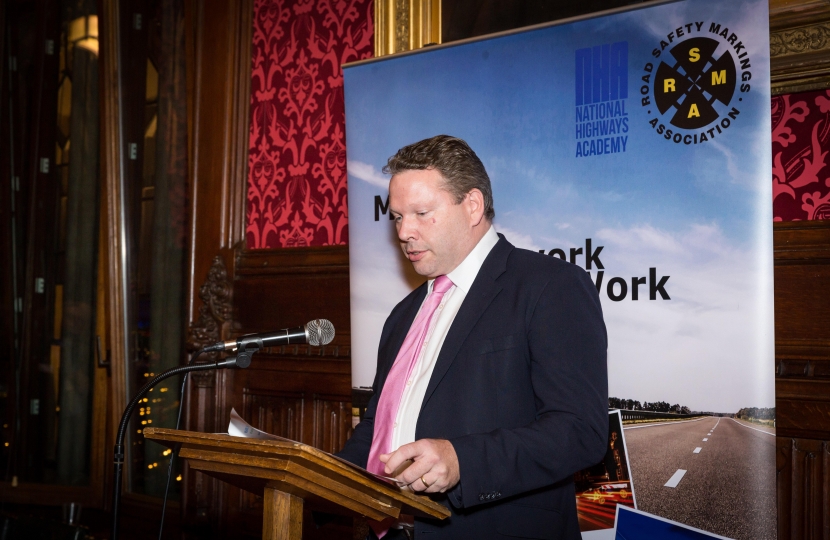 Thankyou, George, for your kind welcome and thankyou for inviting me to give an opening address at your reception – even more so as your Association is based in Gainsborough which borders my seat of Lincoln, in Lincolnshire, so I feel very much a warmth for my County home here at today’s event.

As someone who worked in the transport industry, in various aspects of the sector for many years before becoming a Member of Parliament and then subsequently a member of the Transport Select Committee, I and the Committee have always understood the integral role that road markings play to improve both road safety and also to improve road management and traffic flow.

It is a key part of the integrated transport jigsaw and we ignore its importance at its peril. In fact, on Lincolnshire roads this year we have seen 20 more deaths than last year which is a statistic that needs urgent attention from us all and especially Highways England and the County Council.

Indeed I am often bothering the County Council Highways Department with regard to worn out road markings that have a safety implication to all road and footpath users and need to be re-instated in and around my constituency.

The contribution of clear and safe road markings to road management can also never be ignored either, especially as the volume of traffic on our roads continues to increase and the greater need in a post-Brexit Britain to literally keep the Country moving and our economy growing.

It is vital that with the welcome extra road investment the Chancellor recently announced, that the road markings sector is allowed to make a key and central contribution.  Eventually, should that day come with fully automated vehicles, road markings will be even more important than they are today, and indeed may not just contain relatively cheap paint, but technologically advanced guidance systems or aspects perhaps that assist such futuristic Bladerunner type vehicles.  I don’t know which character in Bladerunner George, or myself, might like to be, but I, and you, may have a few ideas…

I believe there is no point investing the taxes that road-users pay while not ensuring those roads that they,  and you all and I, use are safe, and that any improvements in traffic flow through redesign improvements are temporary because road markings were not seen as being central to the investment’s success.

On the Select Committee, we have raised our concerns continually about safety. Personally I still have grave and to be frank, unanswered concerns about the expansion of All Lane Running on our motorways and the effects it will have on road safety.  The Minister here today has no direct responsibility for this area, it is his colleague’s Bailiwick.

It is the Minister’s colleague, who along with his Whitehall Mandarins at our Select Committee crossed the proverbial central chevrons as far as I was concerned, and then were caught like rabbits in headlights as they suddenly realised that the Transport Select Committee, and myself particularly, did not buy into their sanitised sweetness and light view of motorway driving and All Lane Running.

The moral jury is still out on their decision to forge ahead, and despite blanket radio coverage of public information for drivers on the subject of how to use All Lane Running Motoways, I do not believe increasing capacity on the cheap is what a Government I am a part of should be involved in  - in either the short term nor obviously the long term.

The Government in my view still seems reluctant to take those concerns we have raised seriously and runs the risk of needlessly causing more road causalities.

However, if such changes do go ahead, the Government must ensure this Association and its members play an absolutely front and centre role in doing everything possible to improve safety. And at this point I would point out that I am sure the Minister of Transport, my esteemed colleague and fellow Lincolnshire Member of Parliament John Hayes is taking note! And possibly contemplating the promulgation of my views to his Ministerial colleagues and maybe the Whips’ Office too.

One other point if I may, to continue to make our Country a great success we need our companies to keep reinvesting in their existing staff and also to train new people – especially Apprentices.

Now while it may not be fashionable or even politically correct to say so and those who know me know I have never been one to follow the Guardian’s worldview, but in the main these are the type of Apprenticeships and jobs that young men are more likely to be attracted to than young women, although of course we want opportunities open to all and when contemplating your areas of expertise I am sure there will be suitable avenues for the full spectrum of apprenticeships for both genders.

For far too long now physical outside jobs have been viewed as not as important nor as attractive as those in the service sector.  Let us be clear they are as, if not more, important than many roles in the sector, particularly when viewed with safety goggles on…

In my eyes they provide a vital role in giving meaningful employment, careers and opportunities to many young men. In the transport sector as a whole, we on the Committee have taken evidence from the sector about the skills gap and while others such as in Highways England and the education sector should do more, I am glad that this Association and its members are playing a key role themselves.

On behalf of the Transport Select Committee who greatly value the work of the Association and its members for all road users in all four corners of the United Kingdom, I would like to thank you for everything that you do. I would also like to thankyou all at this reception for the support that you have given the Association and also your contributions to next Spring’s report on Making the Network Work.

I would now like to introduce the Minister of Transport and my good friend and fellow Lincolnshire Member of Parliament, the Rt. Hon. John Hayes, to say a few words from the Government about the invaluable work of the Road Safety Markings Association.

I hope many of you will have heard from the Minister before, if you have not you are in for a treat.  There is, so I am told and reassured, no truth in the rumour that John was contemplating singing, or rather rapping, the opening verse and chorus to the Grandmaster Flash and the Furious Five’s 1983 hit White Lines (Don’t Don’t Do it) which is a stone groove for any of us who love our dance and hip hop music… maybe it’s a good thing we are spared that today, but a wonderful mental image for us all to contemplate as I hand over to the Transport Minister…. A true rappers’ delight…