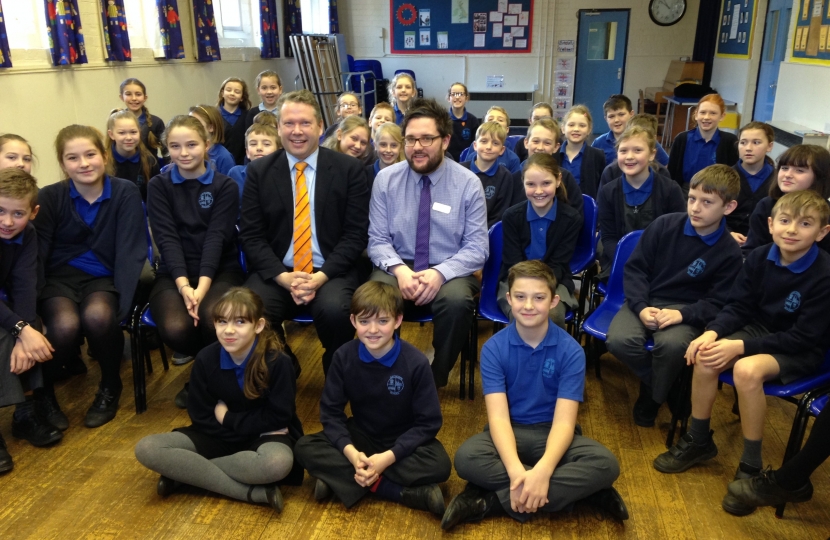 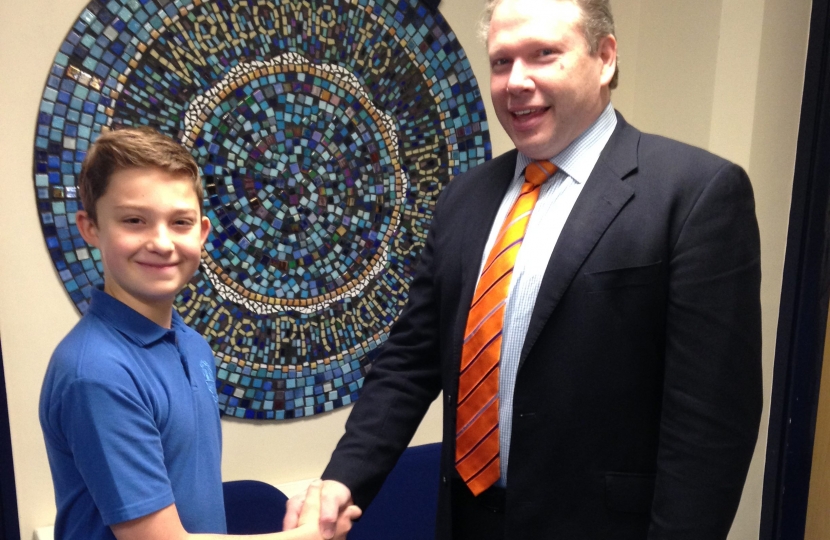 11 year old Finn Bennett is a Year 6 pupil at Caythorpe Primary School. Finn has recently taken an interest in politics and after reading an article on twitter about boys’ performances in school, he decided to find out more. Finn wrote to Lincoln’s Member of Parliament, Karl McCartney MP and to his delight, Finn received a letter of reply direct from The House of Commons.

When asked how he felt about his special delivery, Finn said, “I felt surprised and excited, I was so happy to get a response. The first thing I did was take a photo of the envelope and then carefully open it!”

Karl McCartney MP came to Caythorpe Primary School to meet Finn and his class mates on Monday 6 February, to speak to the Year 5 and Year 6 children about his boys’ performance in school debate.

The pupils were well prepared and fired questions at the MP from the offset.  Pupils asked him everything from, “What was your favourite subject when you were at school?” to “Do you think Theresa May is doing a good job as Prime Minister?”. Karl McCartney MP said afterwards, “What a lovely varied selection of questions that went very well indeed.”

The Member of Parliament talked about his own education and the importance of taking your education seriously in order to pursue the career you later want. He discussed with the children about how statistics show boys don’t do as well as girls in school and so he began a debate in the House of Commons in September last year.

Karl McCartney JP MP, Lincoln’s Member of Parliament, said: “With a debate in the commons you can normally involve five or six other Members of Parliament but this particular topic gained the involvement of 23 MPs from different political parties”.

Experts say this could be simply down to how male and female brains work differently but also a contributing factor could be the lack of male role models for boys during their Primary schooling.

Research in the United States has shown that boys being taught in schools with both male and female teaching staff, boys are achieving better results than those being taught in a female dominated school. So could the UK Government be about to push for more men to join the teaching profession?

Interestingly, Finn’s Year 6 Class at Caythorpe Primary School is taught by a male teacher, Mr O’Mahoney.  Prior to the MP’s visit Mr O’Mahoney has been delivering lessons to his pupils about the structure of different tiers of Government, elections and funding of services.

The children are now much more knowledgeable of Parliament and how things work.

Following the fast paced ‘Question Time’ with Mr McCartney, Finn was then able to spend some time with the Member of Pariament, showing him around his school.

Finn’s fantastic achievement has provided an amazing opportunity for the pupils at Caythorpe Primary School.