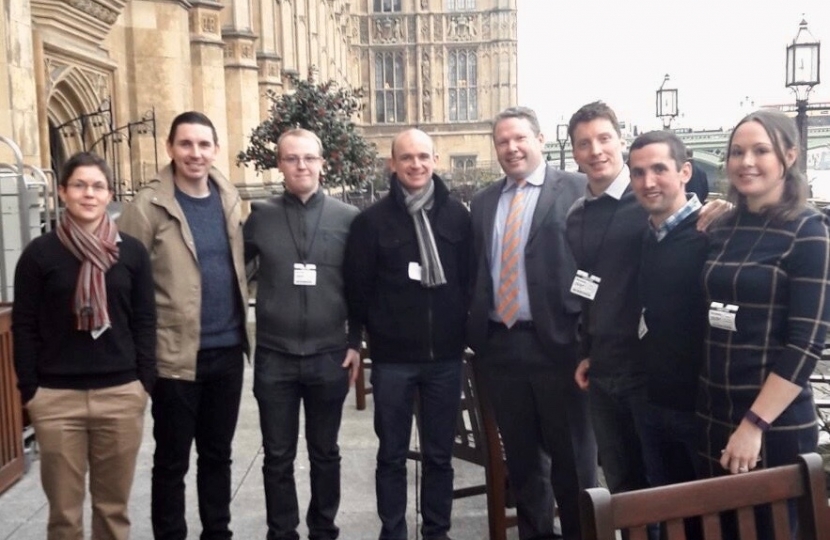 On Wednesday 25 January, Lincoln’s Member of Parliament hosted a visit to Parliament by a group of seven Military Personnel from RAF Waddington in his Constituency.

Led by Flight Lieutenant Mikey “F” Lovell, the group visited London on the 24 and 25 of January to conduct some ethos and core values training and were keen to touch base with their local Member of Parliament at the Houses of Parliament during their visit to the Capital.

After having been given a tour of parts of the Parliamentary Estate by a member of Karl’s Parliamentary staff, the Group met with Karl in the Strangers’ Bar in Parliament for sandwiches, cake and some refreshments.

Before leaving Parliament to head back to Lincoln, the Service Personnel viewed an Opposition Day Debate in the House of Commons on Prisons.

Karl McCartney JP MP, Lincoln’s Member of Parliament, said: “Since I was first elected to Parliament in 2010 I have hosted several visits to Parliament by our brave Serviceman and women stationed at RAF Waddington. I greatly enjoyed meeting Flight Lieutenant Lovell and six of his colleagues.

“We discussed the issues facing the RAF at this time and how this impacts on the very important roles they discharge to keep us all safe.

“The Group seemed to really enjoy their time in Parliament and the opportunity they had to also speak (and listen) to Colonel Bob Stewart MP, as well as Jason McCartney MP who recalled fondly his time as an RAF Officer at Waddington.

“My door is always open to our Forces personnel and representatives from RAF Waddington and I look forward to the next time I host a visit to Parliament by the Servicemen and Servicewomen stationed there.”