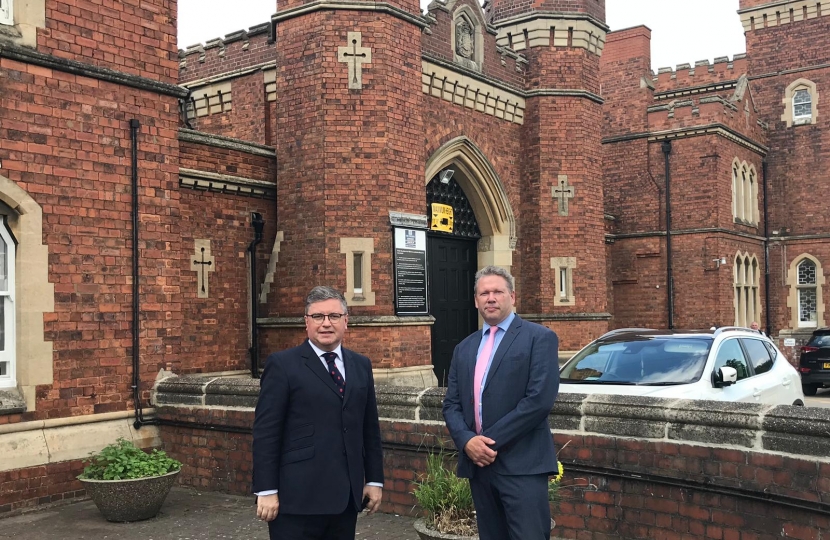 On Friday 9th July, Karl accompanied Robert Buckland QC MP, the Lord Chancellor and Secretary of State for Justice in his visits to Lincoln’s Magistrates' Court, Crown Court and Prison. On the visit, they both spoke to staff at all three locations about the challenges they had overcome during the pandemic in ensuring justice was still being served.  The two MPs also met and listened to some of the prisoners at HMP Lincoln and their concerns and experiences.

A particular point that was discussed was how the introduction of an x-ray body scanner at Lincoln prison had been a "game-changer" in the war on drugs at Lincoln Prison. The scanner technology was introduced in Lincoln last year to detect smuggled drugs, mobile phones and weapons as part of a national multi-million investment. Staff at the prison stated that it had been successfully used in stopping drugs and contraband from making its way into the prison on hundreds of occasions – a clear sign of how organised crime and drugs misuse is being successfully tackled.

The prison has also seen rates of self-harm come down rapidly in the prison and that extra support on the mental health of prisoners was having a positive impact.

The Secretary of State also recognised that Lincoln Prison was playing a key role in showing how preparing prisoners for the outside world when they were released was also having a positive impact. He is looking at rolling out similar schemes across the UK.

He also praised the hard work of the judges and court staff at both the Magistrates and Crown Courts in Lincoln, in dealing with cases including ensuring jury trials were continuing to take place. There was also increases in prosecution rates too and that with the next stage of getting back to pre-Covid mortality, there was more opportunity for cases to be listed.

Commenting after the visit, Karl stated: “I was delighted to have welcomed the Lord Chancellor and Secretary of State for Justice to Lincoln. It gave me the opportunity to re-emphasize the importance of our prison and courts in delivering justice across the City and the County as a whole.

“It was also important that he saw how the extra investment in areas such as scanning equipment, mental health and through-the-gate services really does make a difference to improving the criminal justice system including helping to reduce re-offending and self-harm.

“The staff at the prison and in the courts are brilliant. I was particularly pleased that they had the opportunity to both demonstrate how committed they are and also the value that their skill and hard work brings. The Secretary of State was rightly impressed and clearly gave them a vote of confidence in the work they do – just as I do too.”

Speech on the Covid-19 Vaccination of Children

It gives me deep and great pleasure to speak under your chairmanship, Dame Angela. I compliment my hon. Friend the Member for Penistone and Stocksbridge (Miriam Cates) on securing the debate.