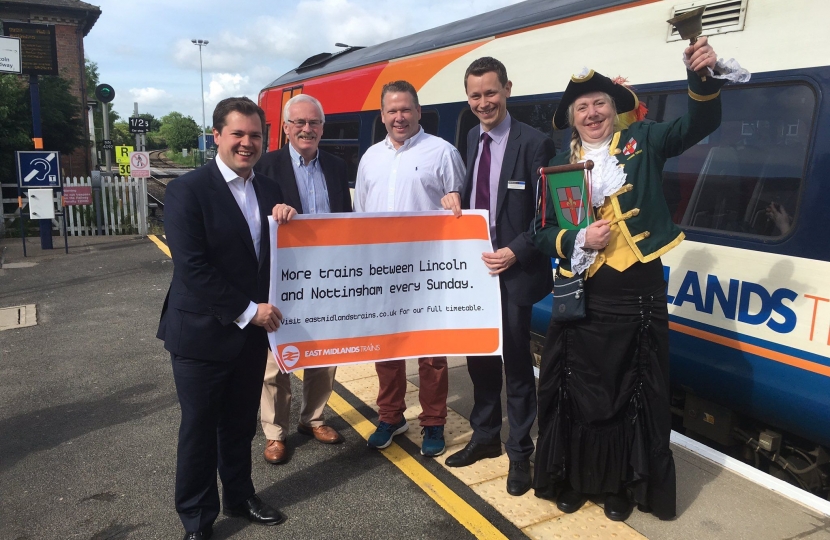 The Conservative Candidate for Lincoln Constituency at the General Election, Karl McCartney JP, has hailed major improvements to East Midlands Trains Sunday services on the Lincoln to Nottingham line while appearing at an event to celebrate the arrival of the first of the new services.

Karl McCartney JP, Conservative Parliamentary Candidate for Lincoln, said:  “I am delighted to have supported for some time East Midlands Trains’ proposals for major improvements to their Sunday services and welcome their inception from 21 May.

“Before I was first elected to Parliament in 2010, I promised the people of our City and my constituency that I would campaign as hard as I could to improve the transport system to-and-from Lincoln, and especially at weekends.

“The extension of the Sunday timetable on the Lincoln to Nottingham line is another important step forward in making our City of Lincoln the most vibrant, successful and modern City in the whole of the East Midlands.

“In addition to thanking both East Midlands Trains and Stagecoach for agreeing to deliver these extra services, I would also like to publicly pay tribute to my colleague, Rob Jenrick, the Conservative Parliamentary Candidate for Newark, who has joined me in pushing for better rail services on this route since before he became a Member of Parliament too.

“Of course I am sure any of the other Parliamentary Candidates in Lincoln, who I believe have been invited to attend today’s event, will of course take the opportunity to welcome such an improvement and congratulate all of those involved in securing these improved services for the electors and rail users of Lincoln, Newark and Nottingham.

“As part of my stated intention to 'Put Lincoln First', I will continue to actively encourage and support all transport providers, as well as our various local authorities and Government Departments, in bringing the missing pieces of our City’s transport jigsaw together.”