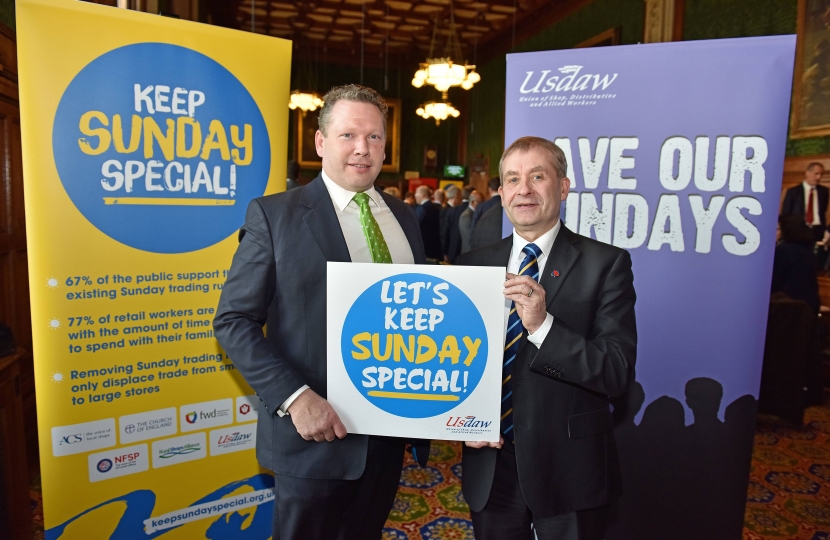 Karl McCartney MP, the Member of Parliament for the City of Lincoln, will tomorrow be voting in Parliament to prevent the extension of Sunday opening hours for larger shops. Karl also added his name to the amendment to the Enterprise Bill, currently going through Parliament, which will prevent the extension from taking place. The Bill currently proposes allowing larger shops to trade for longer than the current six hours, subject to agreement from a local authority.

Karl is not convinced of the need to relax the current Sunday Trading Laws because of the potential negative impact on Lincoln’s local independent and convenience shops, the lifeblood of City’s unique shopping experience. In addition, he is concerned about the impact on the staff employed at large retailers and the need to protect Sunday’s tradition as being a ‘day of rest’ and the opportunity for families to spend quality time together .

He believes the current arrangements set out in The Sunday Trading Act are a Great British Compromise. Retailers can trade, customers can shop, staff can work; whilst Sunday remains a special day, different to other days, and shopworkers can spend some quality time with their family.

Karl McCartney, Lincoln’s Member of Parliament, said: “I have not been convinced of the need to extend Sunday’s shopping hours so I will be voting in Parliament to ensure Sunday stays the same as it is now. There is something uniquely British and traditional about Sunday which not only marks it out as the one special day we have every week, it also already provides enough opportunities for shopping. It is a Great British Compromise that works for everyone.

“I also want to protect Lincoln’s thriving small independent shopkeepers and convenience stories and prevent any potential negative effect on those that work for large retail stores. I am not convinced at all the current proposals offer any level of protection so there should be no change.”

Picture: Karl McCartney MP at a Keep Sunday Special campaign meeting last week in Parliament with the John Hannett, the General Secretary of the UK's of the shopworkers’ trade union, Usdaw.