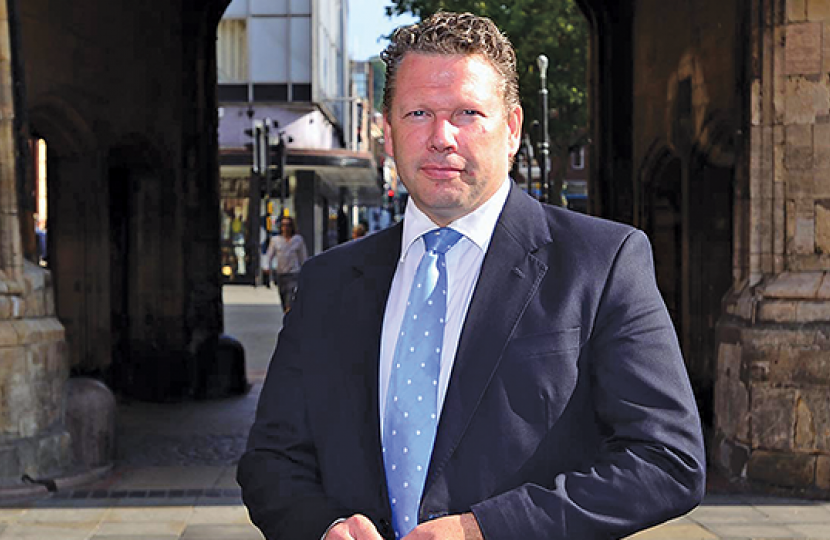 Thankyou Paul for inviting me here tonight and thankyou to everyone for coming to hear my reflections on Brexit and all of the issues and opportunities that it brings, and of course how I feel that reflects and impacts on the private rented sector. I will also touch upon the Housing Sector more widely and answer any questions at the end.

As many of you know I voted and campaign to Leave, primarily because I wanted to bring back control of our laws, taxes, borders and regulations, but also because I believe it will have a positive impact on our City, County and Country.

As the Article 50 letter has been safely received in Brussels, alongside the publication of the Great Repeal Bill and the White Paper, it is important not to keep going over past arguments and debates on whether we should Leave or Remain, we need to look to the future now and make it work. We all have an exciting future if we stay positive.

However, there is always a downside and for me it is in Parliament because it is clear that elements of Labour, Liberal Democrats and the SNP still do not want Brexit to happen, at all, and cannot look to the future.

You only have to see how they behave on the issue. Of course we all want and need scrutiny, which is why I put myself forward to be elected as a member of the Brexit Select Committee as scrutiny is as important in a democracy as the decisions themselves. But the tone, anger and behaviour of those who oppose Brexit is as bad as you will ever see. It is playground, or student politics stuff, and I believe they will wage another two years of this type of guerrilla warfare in Parliament, which risks damaging our economy, of that I have no doubt. This is not because it is in the interests of our people, our businesses and our landlords, but for purely selfish political reasons, and this is worth you all following as I am sure you will over the coming weeks, months and years ahead.

The National Landlords Association regularly surveys its members about Brexit and their latest finding in the East Midlands were 14% were positive about Brexit and 35% were concerned, with over half believing it will make no difference. So I come with a message of reassurance.

The reason for setting this out upfront is that broadly speaking there will not be any direct consequences of Brexit on the private rented sector and having spoken to the National Landlords Association this week, they confirmed that to be the case. This is because housing and planning policy has always been under the remit of national Governments, one of the few areas left untouched by the long arms of the EU and the Commission.  From my experience being untouched by the European Union, when you are still a member is always fraught with danger as it does not take much for this to be negotiated away and then the tentacles of Brussels will be all over you all in an instant.

However of course there will be lots of indirect areas of where the decision to leave the European Union will have an effect on landlords.

The first area is of course the economy. The Bank of England is predicting growth of 2% in our economy this year, higher than the 1.4% they predicted at the end of 2016 and of course far higher than they produced before the Referendum - when they said the world would end overnight. I hope that their powers of prediction have sharpened somewhat over the past year.

I do not need to tell you that a buoyant economy with record numbers of people in employment, means a healthy demand for people to rent, good rental income and access to investment capital. Once Brexit is fully up and running and we have negotiated trade deals with the rest of the world as well as the European Union, I am confident that this economic growth will continue and hopefully increase a touch.

A 2%-3% growth rate is a good stable platform for any country – too fast a growth rate can create inflation and instability, and a lower rate can cause uncertainty, negativity and create the conditions for an actual recession. A healthy economy also means lowering the number of people on universal credit or housing benefits and also reduces the risks of any further increases in landlord taxation or tax relief reductions which I know many of you are having to endure from Saturday.

An additional area will be around immigration, and hopefully a slowing down of the population growth into the country, not just from people already here but also from immigration. Population growth caused by net immigration is at the moment the equivalent of a new city the size of Nottingham or Leicester every single year, and the challenge is where are these people going to live? No wonder housing growth cannot keep up, leading to higher housing prices and costs as well as general strain on our public services.

Half of the net immigration is from outside of the European Union so hopefully when we have new immigration controls in place, we will be able to reduce immigration overall. This is obviously important when it comes to dealing with the Right to Rent checks that you as landlords have to take part in and also demand for private rental accommodation more widely. I hope it will also deal with rogue landlords who house far too many people in a single household.  This being a distinct problem in areas of our County.

In this City where I expect many of you house students from our two universities and the Colleges, I do not see any new border controls having an impact on the numbers of international students, so there should be no decrease in demand. This is especially the case as the Government has made it quite clear that this Country will always remain a welcoming place for foreign students.

I lastly just wanted to touch on housing more broadly. It has been clear for at least a couple of decades now that housing policy and the sector in general is not working, and if the housing sector is not working, our Country is not working to the best it can.

House prices are far too high, if the asking prices are being achieved, and if I am being honest, rents are probably too high, which itself is a direct result of the house prices being too high.

The cost of housing as a percentage of average incomes is now nearly 50% whether you buy or rent, and people are living at home with their parents for longer which I do not think is a good thing and in fact it is not fair to our younger generation – for those of you of a certain age you are probably thinking – hey Karl, it is not fair on the older generation either…

We, I presume, are aware we in the UK are not building enough homes which I know the Government is starting to now really force a change of pace on this. Though they do have to be in the right place and I have real fears about building houses on floodplains which the City Council seems hell bent on doing in their promised Swanpool Development to the West of Lincoln. I am not reassured at all that this is the right thing to do.

I further recognise that overall the Government may not be the flavour of the month in the private rented sector when it comes to changes in tax relief, checks on the right to rent and a future ban on upfront fees for letting agents. Where the Government is coming from though is to try and rebalance the system - which has been moved away too much from home ownership in the past two decades. The ideal is to have a housing economy where more people have the choice whether to buy or rent and that there is both inter-generational fairness and a sense of fair play.

As in all sectors, people like yourselves who care about the homes you rent and the tenants you rent to, can feel as though you are being singled out, but it is the rogue landlords the Government is after.

With 20% of households now living in private rented sector across the Country, the Government has to be sure that such an important part of our housing economy is working well. While I have heard the concerns that the sector has about a lack of a general co-ordinated Government plan for the private rented sector, I hope that is changing and in fact the National Landlords’ Association does recognise that this Prime Minister is listening to the sector whilst that did not happen perhaps as much under the previous Prime Minister and Ministers.

Lastly, I would like to thankyou all for making sure people in Lincoln and the County have good homes to live in and that we have that flexibility in housing that we need. Even more so, with such a large student population who may only be here for three years, I want to make sure they are in well-maintained houses. The same is said for our young professionals and those coming to work here for short periods due to the international manufacturing base in the area. The private rented sector is a sector that adds real value to this City, a City that is booming and has become the most loved city in the whole of the East Midlands. You are all playing an invaluable part in the Lincoln Success Story of today – and for that I thankyou.