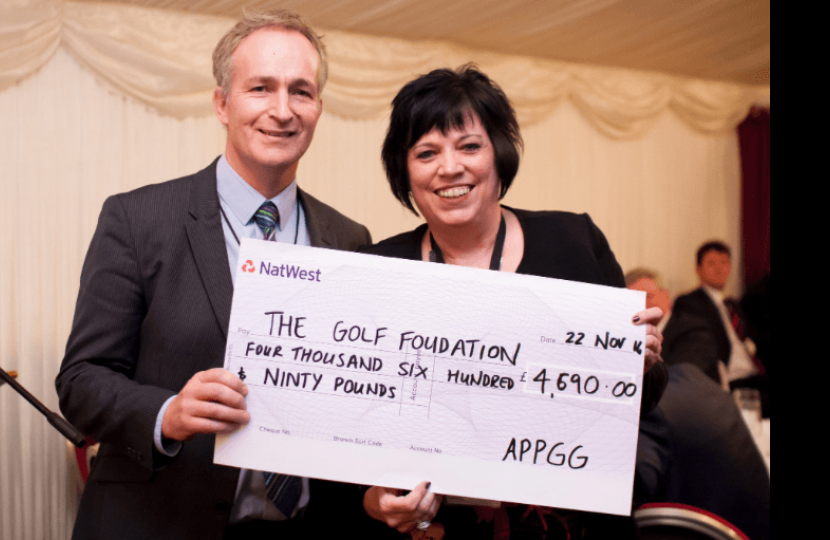 Thankyou for all coming tonight in the lovely surroundings of the Palace of Westminster for the first anniversary of the All Party Parliamentary Golf Group, which has the singular, and deliberately broad remit, of supporting the sport of golf.

Against this background, we have been very active over the past year and tonight’s inaugural annual dinner is a fitting celebration of that work, and of an exciting year of golf.

The Group’s initial focus has been on increasing participation, particularly amongst women and BME groups, and also on improving the lazy and perhaps longstanding, and incorrect, perceptions of the sport.

One thing that has become clear since we formed the Group is the huge support for the sport across all four corners of our great Country and right across the full spectrum of our society. This is why we are delighted that so many of the various bodies that represent different sections of the sport we all enjoy are here this evening and if only we had the space tonight to invite everyone who enjoys the sport to this evening.

As many of you may know I am an enthusiastic player but not very accomplished, however I will always remember the day I broke ninety. A glorious sunny day so I went and had a few beers in the clubhouse that day and… you know… I was so excited I forgot to play the back nine…

More seriously, this year has certainly been an eventful year for golf in the UK.

In the professional game, the Women’s British Open returned to Woburn Golf and Country Club for the first time since 1999. Whilst there was no British winner, there have been some encouraging performances throughout the year, particularly from Charley Hull, and we hope to see a strong UK presence in Team Europe at next year’s Solheim Cup.

There was success in the men’s game as Danny Willett became the first British player to win the Masters since Nick Faldo in 1996, whilst Justin Rose won the gold medal for Great Britain at golf’s welcome return to the Olympics. The Open returned to Troon and was won by Henrik Stenson, and there was a home-grown winner of the PGA Championship at Virginia Water, Chris Wood. We won’t mention the Ryder Cup.

In the amateur game there was success for Great Britain and Ireland over the USA in the Curtis Cup, which the men’s team will be looking to repeat when they travel to Los Angeles for the 2017 Walker Cup. The Men’s British Amateur Championship was won by Scott Gregory from England, whilst the Women’s competition was won by Julia Engstrom from Sweden.

All of us I am sure are aware of the importance of encouraging young people to be active and participate in the sport – in fact in any sport. It is good to see many individuals in the room who are working hard to help drive junior participation in golf, and on behalf of the APPG can I say that the Group is delighted to be able to support the Golf Foundation through this dinner, and the excellent work that it does to encourage young people to play the game.

So what have we been doing here in Parliament?

In March the Group hosted a reception here on the HoC Terrace for The R&A, launching a report by Sheffield Hallam University’s Sports Industry Research Centre into the Economic Impact of Golf to the UK Economy. As Chairman of the Group I also held and led an Adjournment Debate in the House of Commons on the same topic.

The Group launched National Golf Month at an event in Parliament ON Speaker’s Green in April, which provided all Members of Parliament with an opportunity to see the excellent work being done in the sport at the community level, and to promote opportunities for people to participate in golf.

We also hosted an England Golf Partnership reception in Parliament on developing grassroots participation, and also showcased the “Get into Golf” initiative at the Parliamentary Sports Fair. Some of my fellow Members of Parliament golfing skills certainly had the tourists on Westminster Bridge ducking for cover.

The Group continues to be an active voice for the game at all levels, and have supported the campaign to stop the closure of Beckenham Place Park golf course by the Executive Mayor of Lewisham, as well as a variety of other issues across the Country affecting the sport of Golf.

And we provide regular updates to stakeholders around the world about our public-facing activities.

Just a brief word on our meetings in Parliamentary Meetings

Our Parliamentary Group welcomes a range of individuals from all levels of golf to speak at its open meetings.

And we look forward to hearing from many more of our stakeholders in the future.

Much of the Group’s work takes place between meetings, and Group Officers have had a plethora of meetings with those in and around the world and sport of golf on a myriad of issues.

No anniversary dinner would be complete without giving thanks to a number of key people and organisations.

I would like to thank all of the Group’s supporters, without whose assistance the Group would not be able to deliver its aims and continue to challenge the issues surrounding golf.

My thanks to Covéa Insurance, especially to James Reader, for their support and for this dinner in particular.

My thanks also goes to:

Thankyou too to all those Members who have supported golf, both in Parliament and outside.

Our Associate Members also provide a crucial and critical insight into the challenges the sport faces at all levels. We are grateful to them for their continued support, and it is good to see so many here this evening.  You all act as advocates for us at the APPG and the game itself – so thankyou to all of you and from my fellow Officers and I from both Houses of Parliament.

I would like to say this all would not have been possible without the dedication and hard work of both Jack Baker and Mark Ramsdale.

My final thoughts are to urge everyone to become more involved and urge others too as well.

We welcome input and everyone here is welcome to join the Group.

We do need your support if we are to continue our work, so please speak to me, my Parliamentary colleagues in the room, Mark Ramsdale or Jack Baker about joining or becoming involved on a supporting basis.

I leave you with a couple of thoughts: